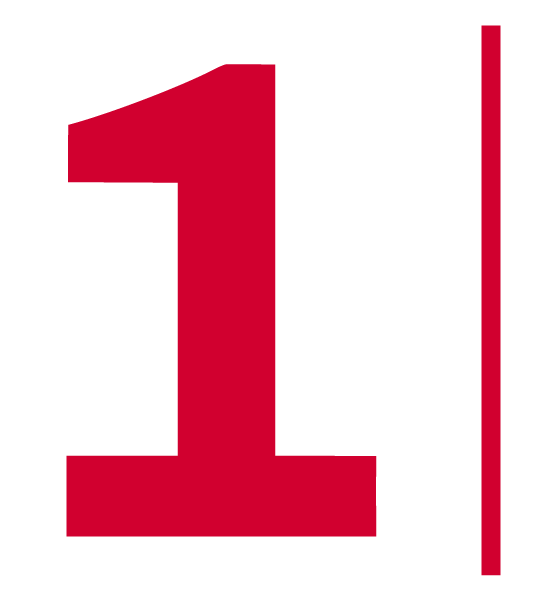 We serve all patients with excellent and affordable eye care, regardless of their ability to pay. We have a full-service eye hospital in Mombasa, Kenya and 3 satellite clinics in Kilifi, Voi and Mariakani. 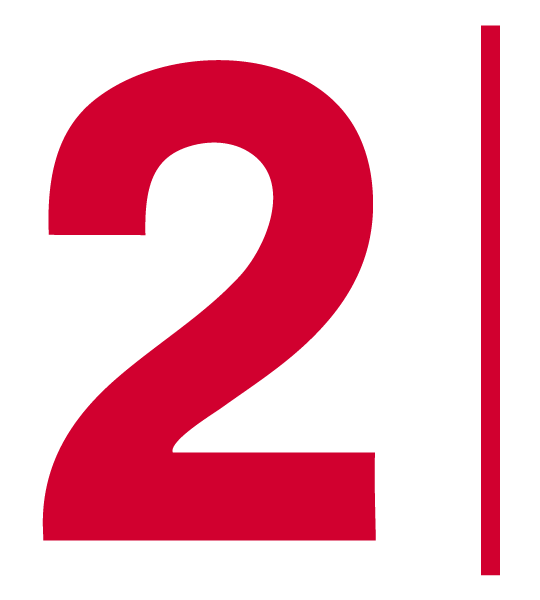 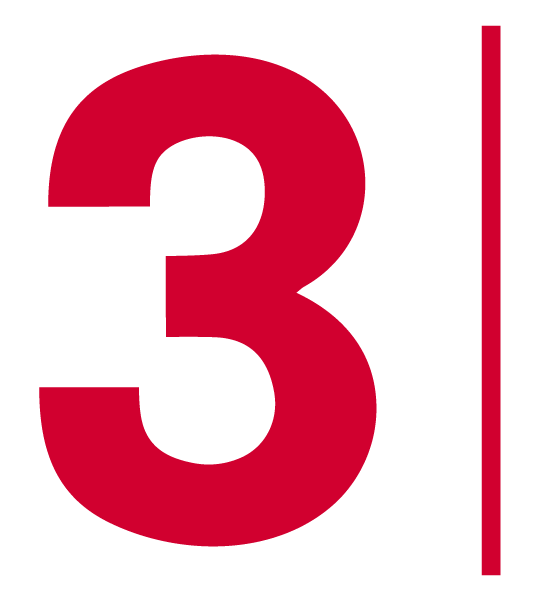 Through discipleship, we are planting new churches every year. We currently have 87 churches in the coastal area of Kenya.

Dr. Bill Ghrist was a successful ophthalmologist in a private practice in Glendale, CA in the early 1960’s. After rededicating their lives to the Lord, Bill and his wife June began growing spiritually in a small evangelical Church in Glendale. He also began doing short term mission trips to Mexico, and he spent a summer in a small mission hospital in eastern Kenya. In 1966 they decided to sell the practice and move their family of 4 children, Chris (14), Tim (12), Doug (9) and Bonnie (2), to Kenya to become missionaries.

The Ghrists moved to the hospital Bill had previously visited.  However, with only one other doctor, Dr. Ghrist was only able to do ophthalmology part time.  The rest of the time he had to pitch in as a general physician. By 1969, they decided to move to a major city so that he could focus on his specialty. Nairobi, the capital city, already had several eye doctors, but Mombasa had only one, aging eye doctor.  They felt that God was leading them to the Coastal city of Mombasa. After arriving, they began to look for a location.  They chose the present Lighthouse site because it was near a General Hospital, and Bill never wanted to deliver another baby in the middle of the night again!  It was also near the Old Harbor where there is a regular, lovely sea breeze, and it was on a major street—so it was, and still is, easily accessible.

By the end of that year, he had opened a small eye clinic that was to be accessible to everyone. He soon became a part of a flying eye service that did eye camps all over East Africa.  He once traveled to South Africa to do cataract surgery on a member of the royal family! At the clinic in town, surgery was done 2 afternoons a week.  Because of this, they pioneered the idea of an outpatient surgery center, which was only done in one or two other places in the world.  This was an ideal solution to do cataract surgery on a shoestring budget! The clinic progressed well and became recognized as a major eye clinic and surgery center for the whole country.

Each morning, Dr. Bill or June would open the clinic with a Gospel talk and tell the patients of all faiths and religions the good news: Jesus came to this world 2,000 years ago to live a perfect life and then die a sinner’s death on the cross to save us from our sins. He would use flannel graph presentations, film strips, and preaching every day, seeing many of the patients respond by placing their faith in Jesus Christ. Soon, some of those who responded began to come to a Sunday School they held in the clinic waiting room, and this became the first Lighthouse for Christ Mission Church. Later, young men began coming to be trained by the good doctor on Wednesday afternoons.  They were taught to go out and share their faith on the nearby streets and before long, were being trained to start small churches of their own.  By the late 1970’s, five small churches had been planted.

In 1976, Dr. Bill had his first occurrence of a very fast growing cancer in his leg.  He went back to California for treatment, radiation and chemotherapy. He asked the Lord for a little more time in order to see his daughter  graduate college, to find someone to continue the work in Mombasa, and for him to care for more of the poor. Amazingly, the cancer did disappear and for another 5 years, he returned and served the Lord in Mombasa. But in early 1983, the cancer returned. This was the very year his youngest, Bonnie, was to graduate, and the first year his second born son, Tim, could come out to keep the work going. Just 5 months later, Bill died in the City of Hope in California, with his family surrounding him.

Later that year, Tim and his wife, Toni, with their 3 boys (Jason, Josh and Joel) arrived in Mombasa to continue the work. Within a year, Dr. Bill Johnstone came out to keep the clinic open, followed the next year by Dr. Dean Larson, a close friend of Bill Ghrist. Dr. Dean Larson sold his practice in the States and for the next 16 years, he kept the Lighthouse for Christ Eye Centre open and growing. Starting in 2000, excellent Kenyan Ophthalmologists have overseen and directed the eye clinic. First, Dr. Dan Kiage, and then in 2005, Dr. Ibrahim Matende stepped in. Fall 2017, we welcomed Dr. Fredrick Korir as Medical Director.  Every year the Lord has led more and more patients to our steps; now we see over 30,000 patents a year. Those 5 small churches have grown to over 80 churches, and the simple Bible teaching on Wednesday afternoons has become a Bible School, training young people and village pastors to know the Lord and the Bible well. 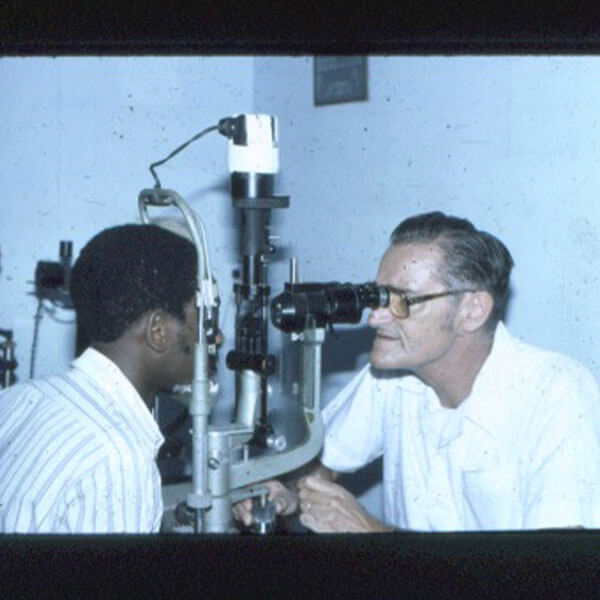 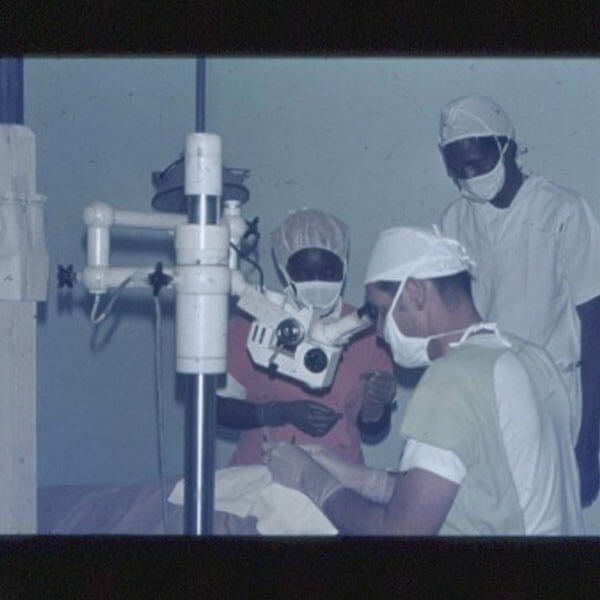 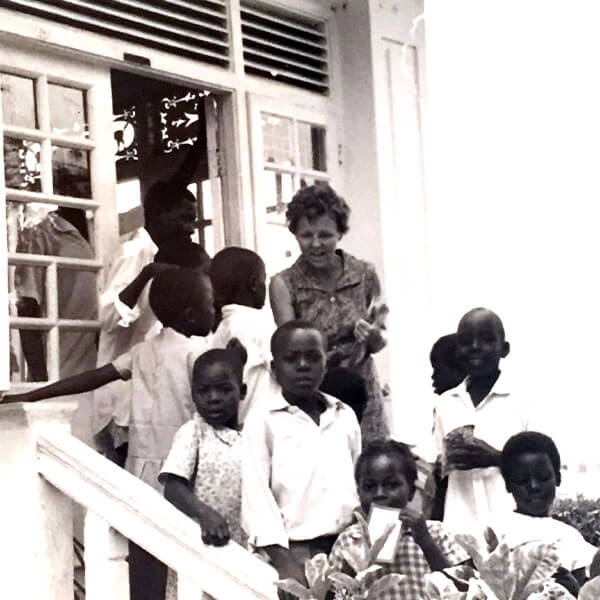 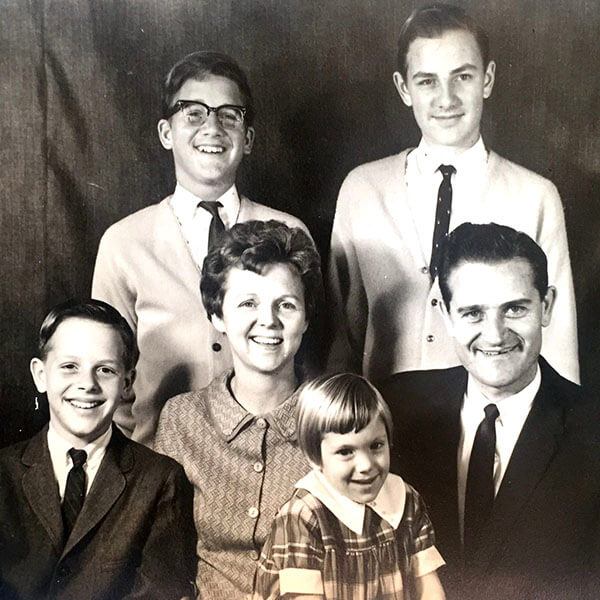 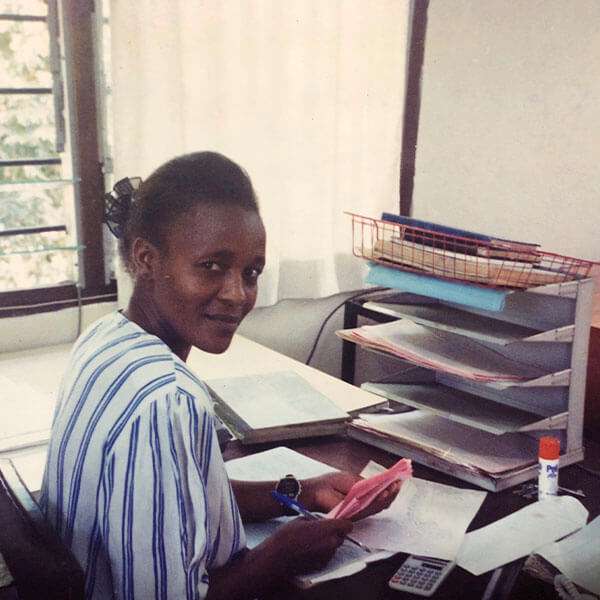 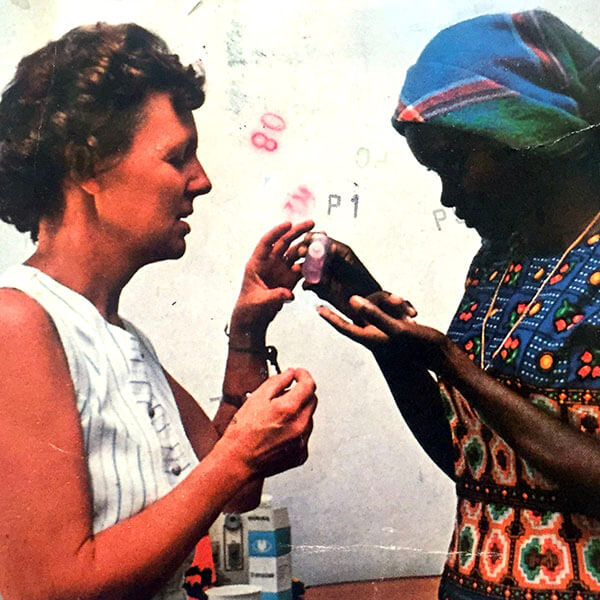 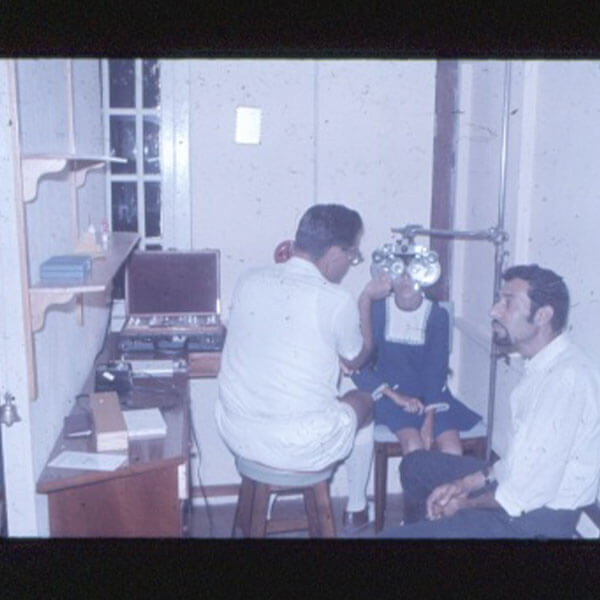 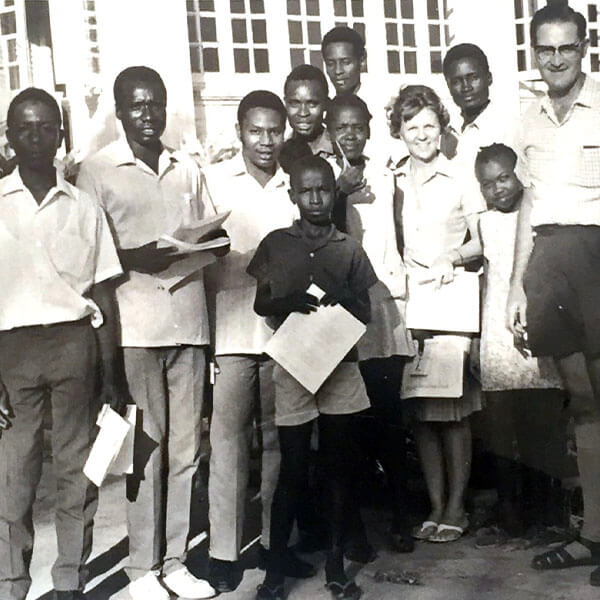 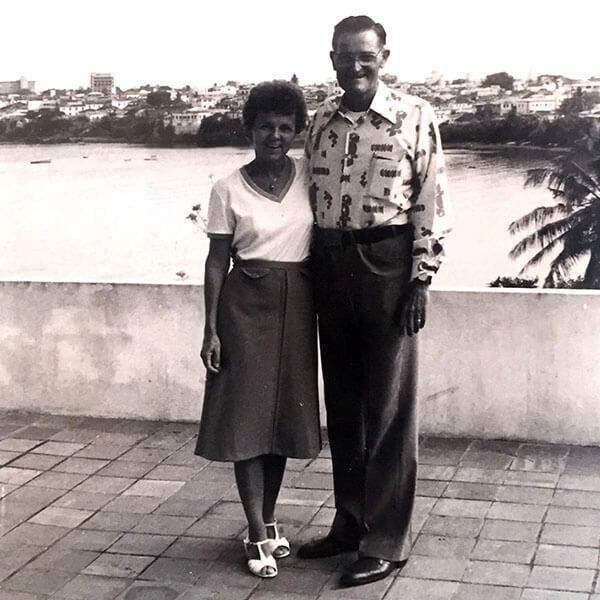 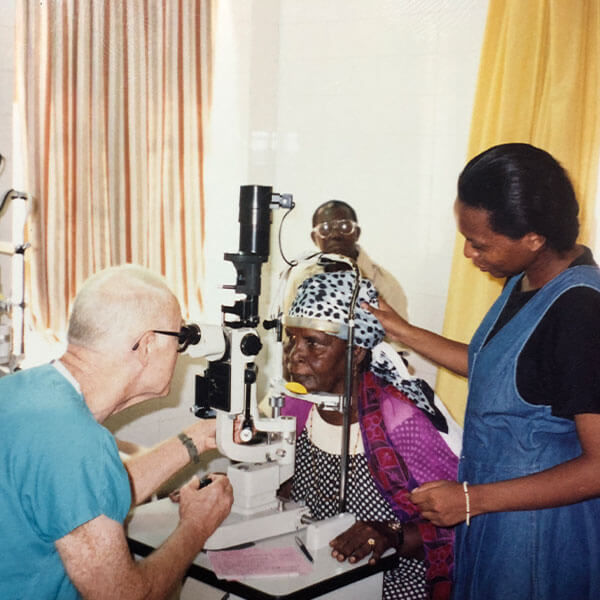 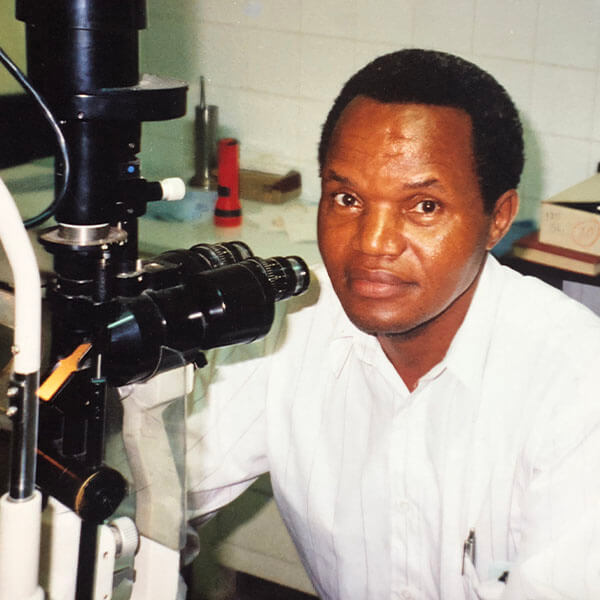